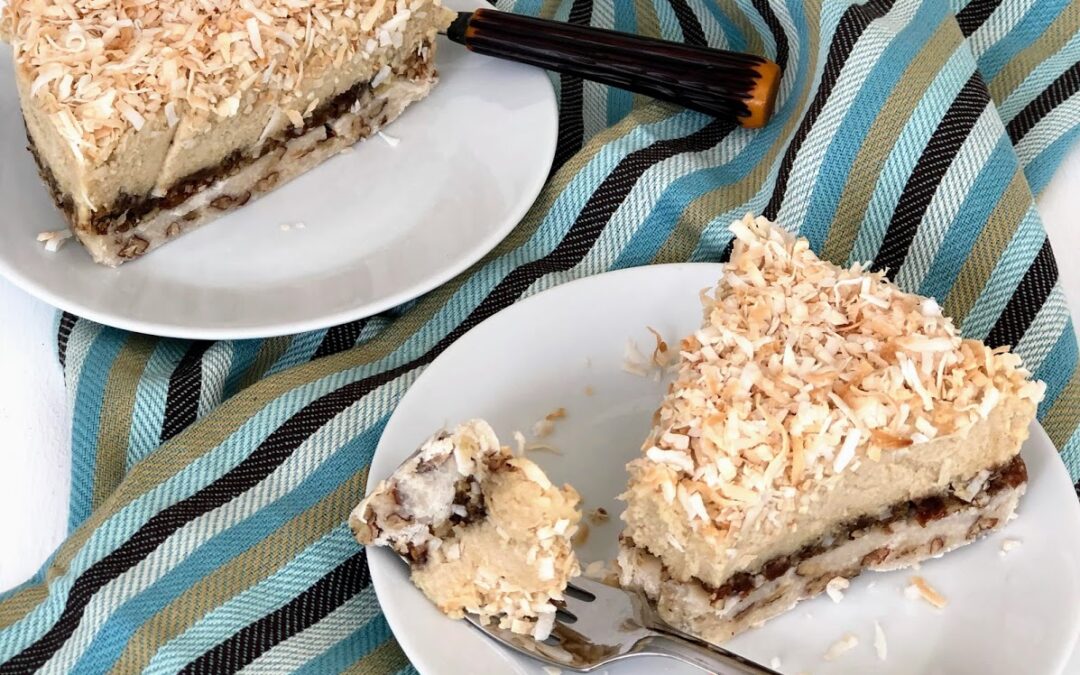 It’s been a long while since I made a cashew cheesecake. A favourite this time of year is my Vegan Strawberry Cashew Cheesecake featuring local in season strawberries. But this past week I had coconut on my mind, and Praline Coconut Cheesecake is the result.

This Praline Coconut Cheesecake recipe was dreamed up as I lay swinging in our hammock under the big chestnut tree. My love asked me what I was doing with my phone and I said, “I’m creating a recipe.” He kind of chuckled but knew anything was possible. The next morning, I made my first Praline Coconut Cheesecake and it was sooooo good! My sister and brother-in-law came for a visit and got to be the guinea pigs. They loved it too. 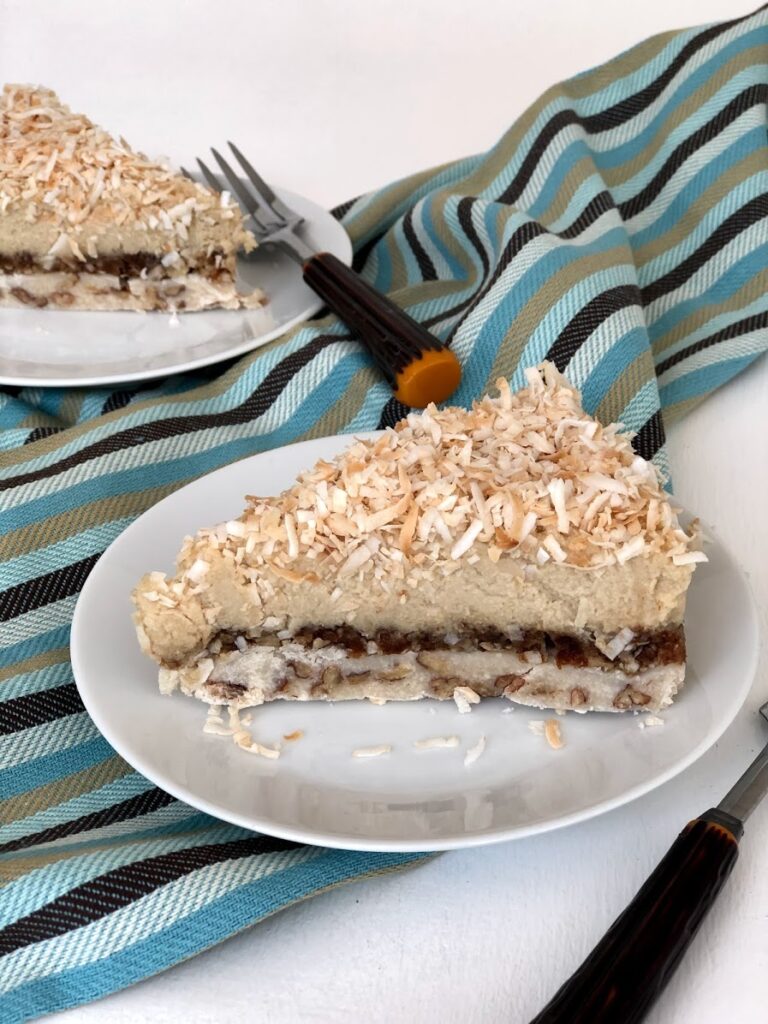 Let’s first be very clear that this is not a recipe for anyone counting calories (which I don’t believe it anyway). This is a beautiful rich, special occasion dessert with lots of nutrient dense nuts and coconut, so a small slice is all you need to satisfy your craving for something sweet and creamy. 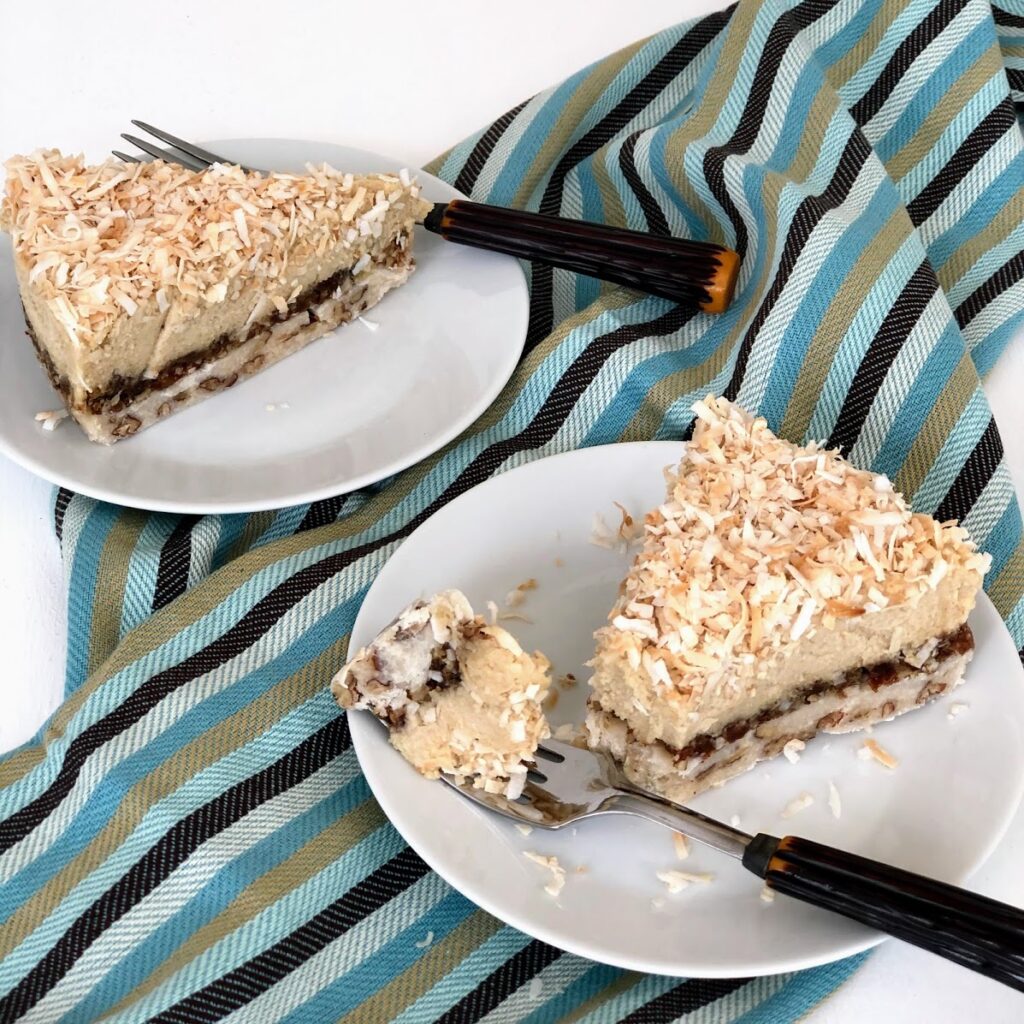 Have I mentioned how much I L-O-V-E coconut? I swear I eat it every single day. I enjoy a spoonful of coconut milk in my dandy blend in the mornings, and either Coconut Mounds or coconut smiles are my go-to snack these days. Sometimes I combine a handful of coconut smiles with unsweetened carob chips and raisins for a healthy, homemade nut-free trail mix. If you are not familiar with coconut smiles, they’re thin shavings of coconut that are lightly roasted so they’re crisp, nutty and tropical. I’ve seen them a while ago in bags at Costco, but I like to buy them at our local natural foods store, Eos Natural Foods, to keep the money in our community and support a store where they know their customers by name.

Coconut and pecans are a duo made for one another. Add maple syrup and you’ve got a delicious praline flavour. I upped the wow factor of this Praline Coconut Cheesecake by making two base layers, a praline fudge layer and then a pecan coconut crumb layer. You can actually make this cheesecake without the praline fudge layer and it’ll still be ahh-mazing, but the extra base layer of fudgy, dreamy creamed coconut, maple syrup and pecans makes this cheesecake over-the-top decadent. 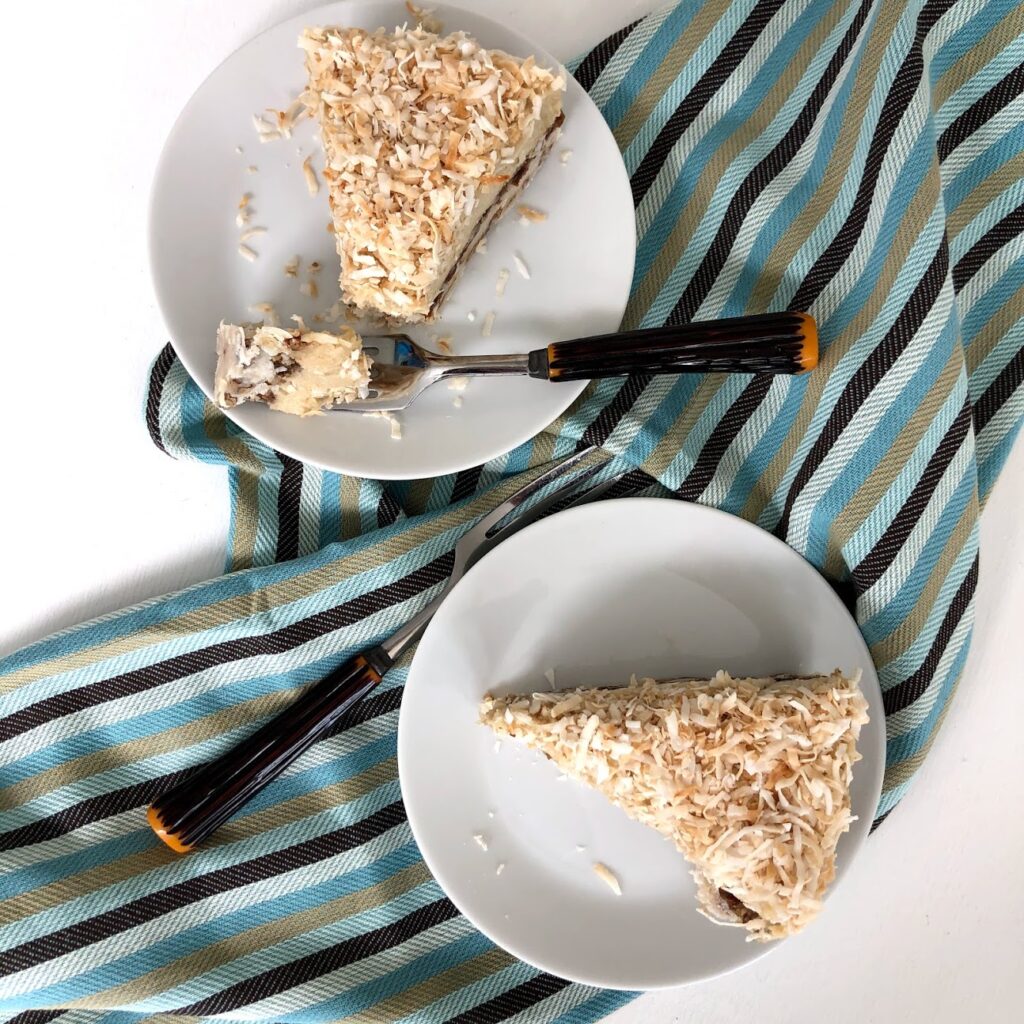 As I said already, I love coconut, so I’ve included it in a variety of formats in this recipe. You’ll need creamed coconut (also called coconut manna or coconut butter), coconut oil, coconut milk, coconut cream and coconut flakes for this cheesecake. For an explanation of the differences in these, check out Coconut 101. If you’re worried about opening a can of coconut milk and not using it, pour the rest in ice cube trays and freeze them. The cubes can be thawed overnight in the fridge as needed or used frozen in smoothies. You can do the same with coconut cream. 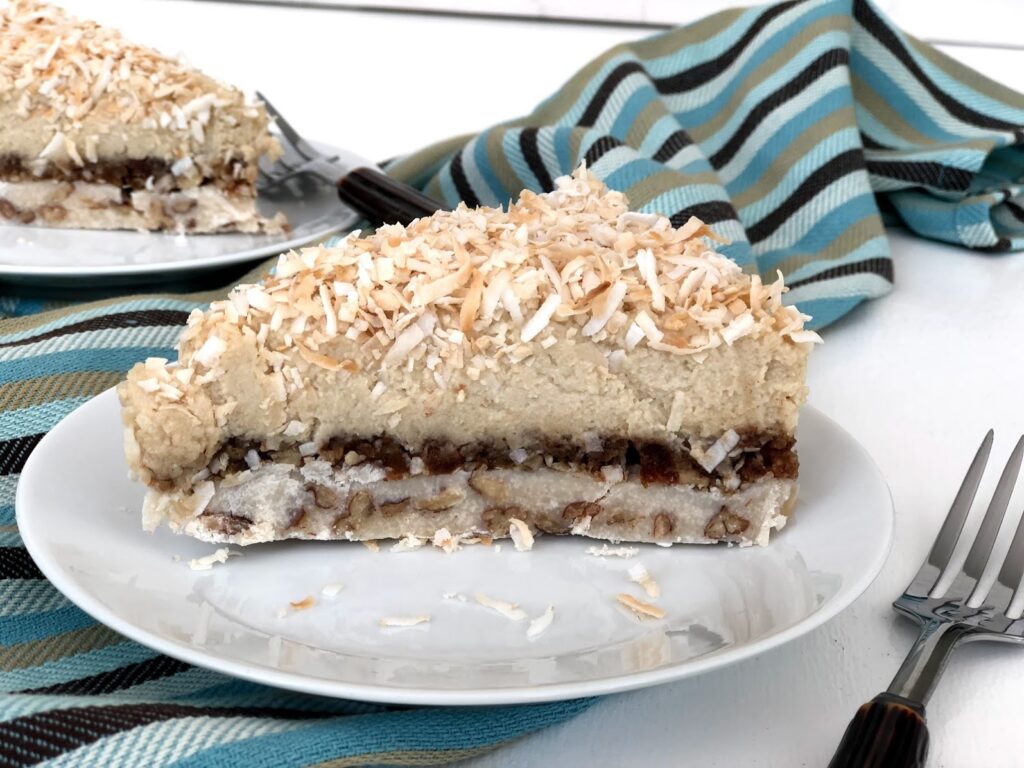 This recipe may look long and complicated, but it really comes together quite quickly. Toast the coconut flakes; melt the ingredients for the fudgy praline layer; process dates, pecans and coconut for the crumb layer; process cashews and cream everything together for the cheesecake layer; top with toasted coconut. Simple. Now, let’s get at it and get it made. 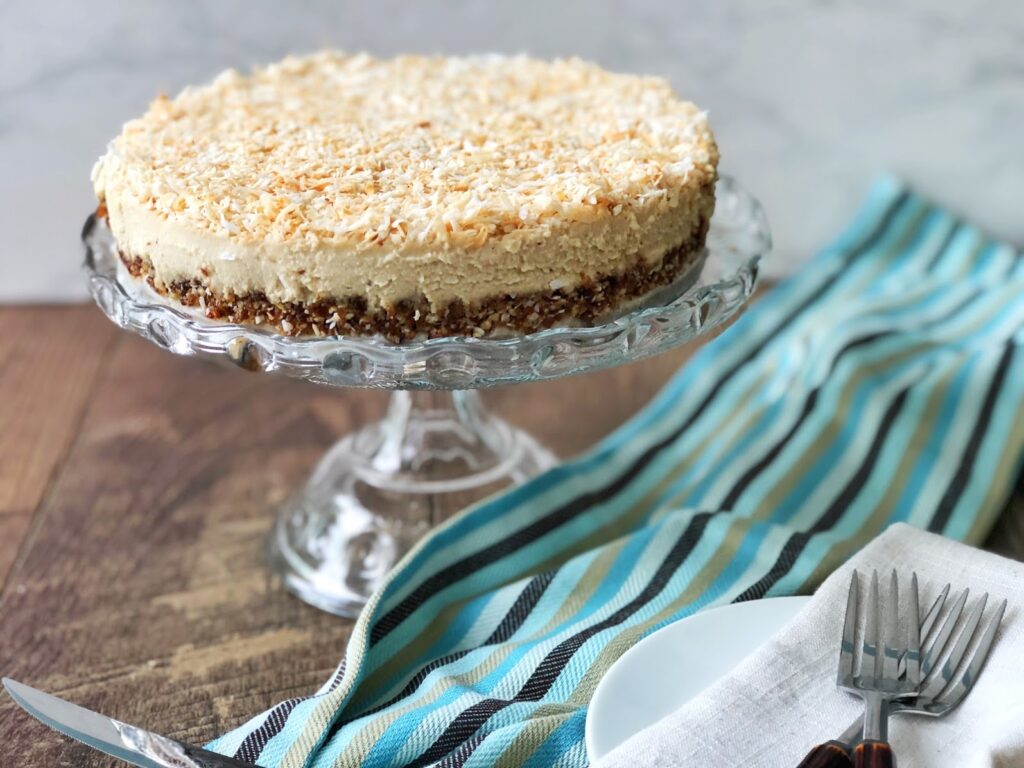 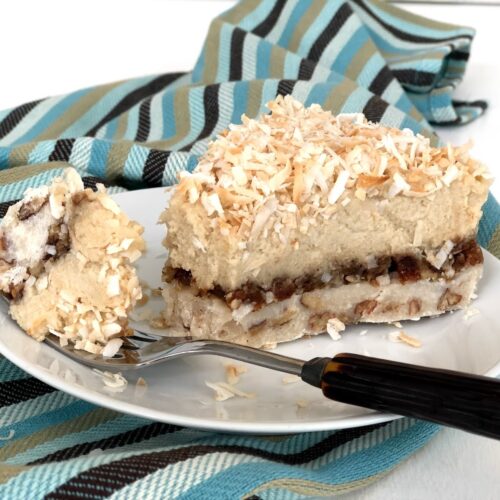 This cheesecake can be made without the praline base layer. The crumb layer can be the base of the cheesecake.
Keyword cashew cheesecake, coconut, pecan, plant based, raw cheesecake, vegan, vegan cheesecake