Social Connections: Foraging and Dining in the Outdoors 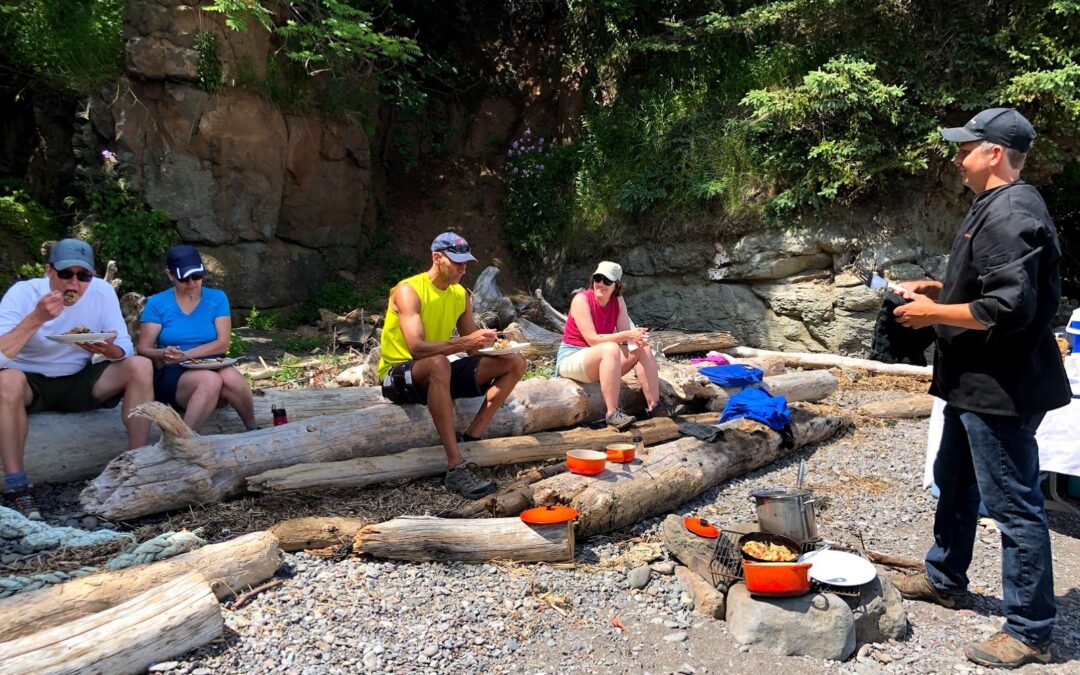 Social connections are important components of finding balance and adult play. And what better way to honor social connections than exploring and dining in nature with close friends and loved ones.

After some email and phone exchanges, the day finally arrived for this Culinary and Holistic Nutritional Professional to connect in nature with a local Wild Chef for a wild food adventure. From start to finish, the midday adventure with my love and some dear friends was informative, entertaining and nourishing in every way.

Health Benefits of Time in Nature

Spending time in nature has a multitude of benefits for health and well-being: 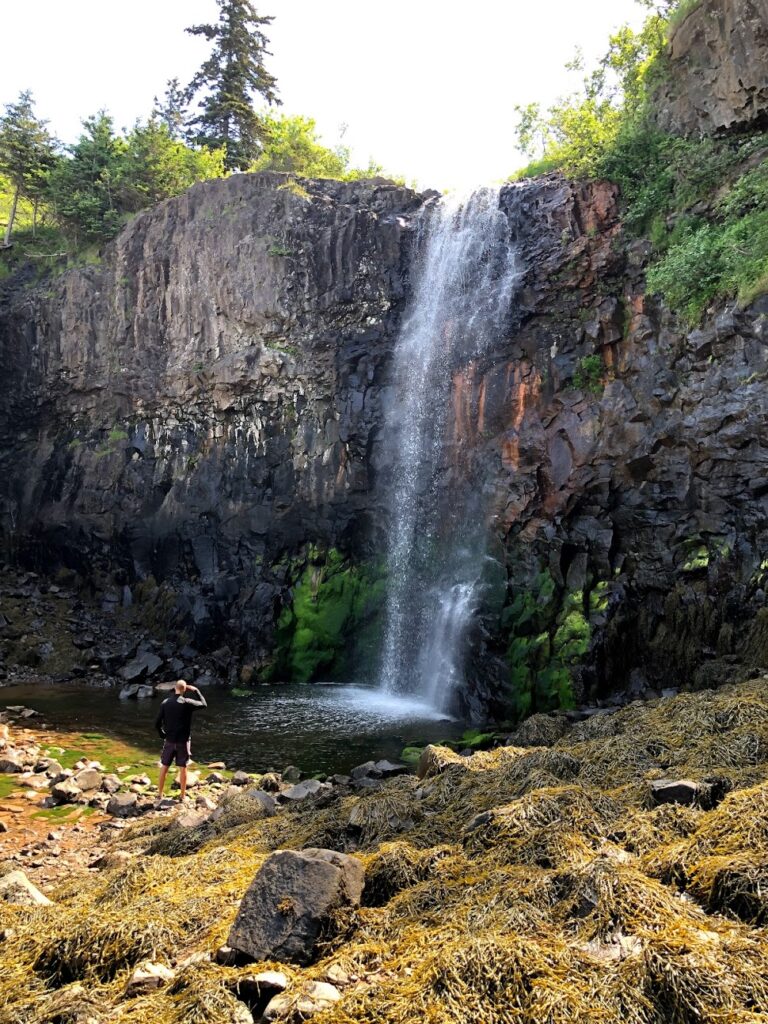 Scandinavians have an expression, called friluftsliv (pronounced free-loofts-liv), that translates as “open-air living”. The term was popularized by the Norwegian poet and playwright Henrik Ibsen in the 1850s. Ibsen used the term friluftsliv to described the value of being in nature and remote locations for one’s well-being (1). 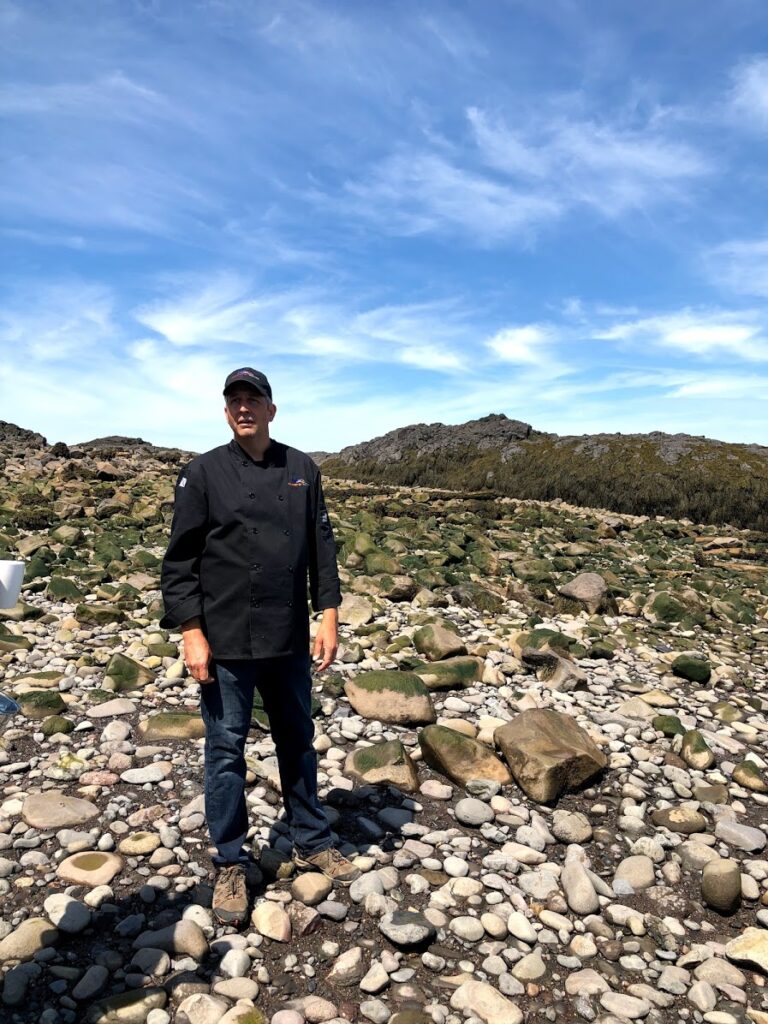 I don’t know if Chef Sean Laceby from Gourmet by Nature is aware of this term, but after spending a couple of hours with him and listening to his stories, I’m pretty sure that this one word could be his life’s motto. 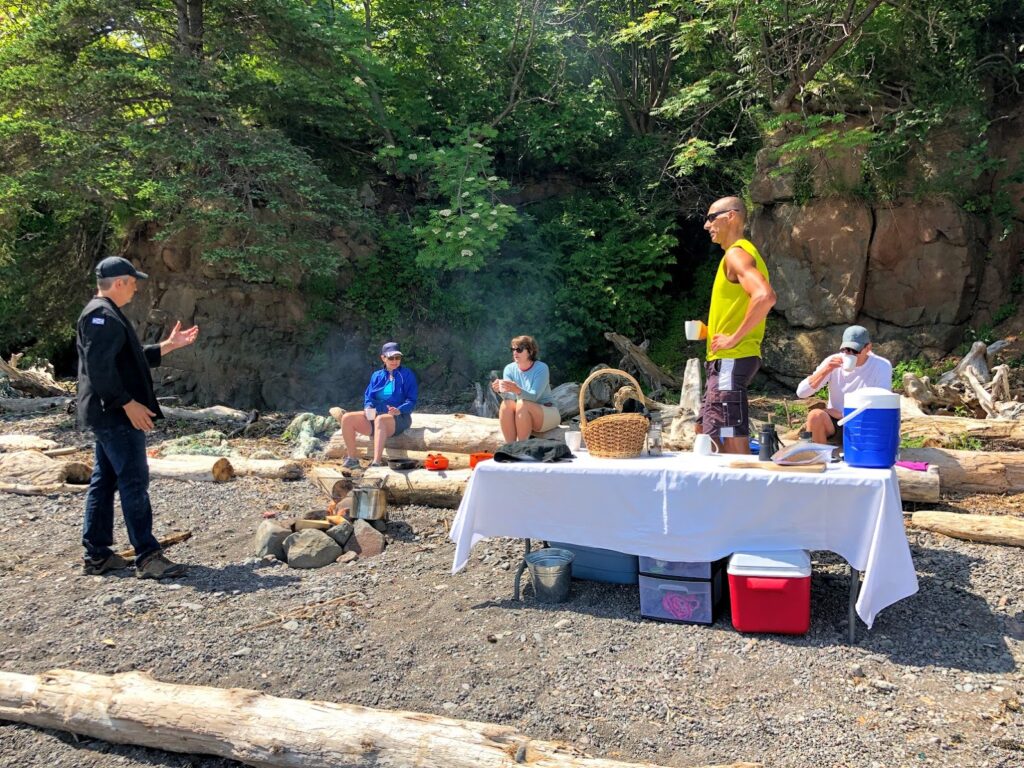 Wild Chef Sean Laceby sharing information about foraging and stories about how he combines his love of nature and his talents as a chef.

My love and I along with three of our friends met Sean in Baxter’s Harbour, NS, on the Bay of Fundy, home of the world’s highest tides, for a Gourmet by Nature foraging and gourmet lunch on the ocean floor during low tide. Because we were foraging and dining on the ocean floor, our adventure had to be timed with the tides. We arrived at 11:00am as the tide was still going out and I struggled to decide where to look first as I took in the sights of the lovely bright colored pots surrounding the fire in the rocks, the pristine white tablecloth covered table that Sean had set up, the spectacular view of the beautiful blue sky and calm ocean water, or the glorious waterfall flowing into a small pool of water. 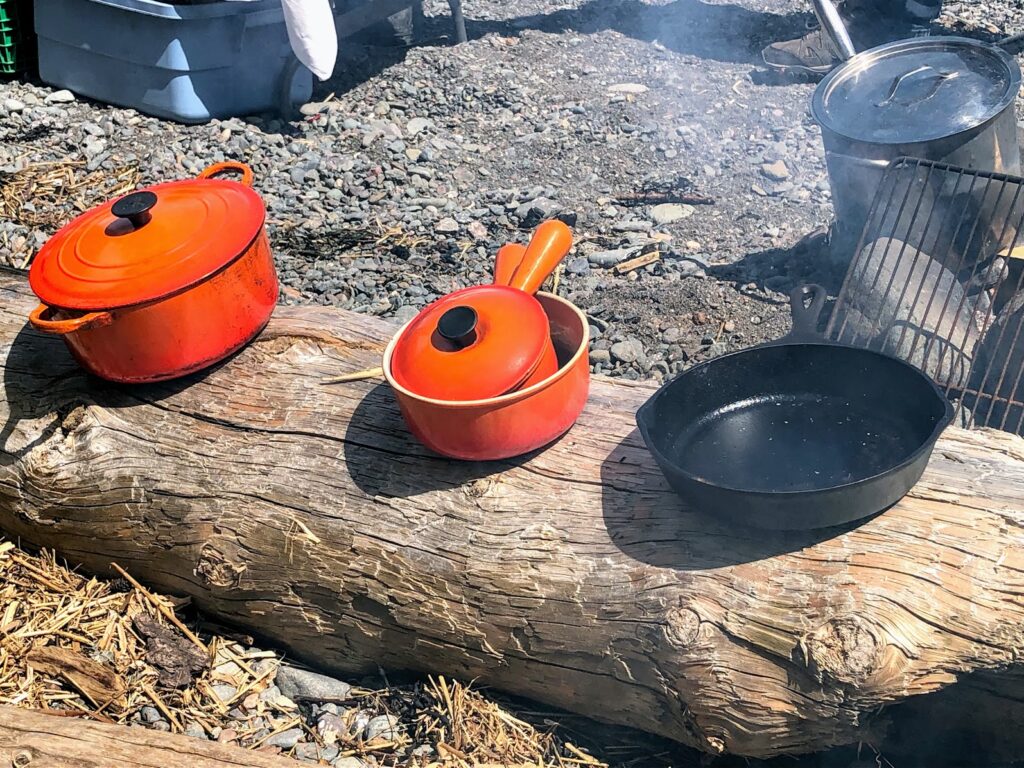 Standing on the ocean floor, enjoying stunning views of the falls and the ocean at Baxter’s Harbour, NS.

Chef Sean introduced us to the area, shared a bit of history of how Baxter’s Harbour got its name, and offered us all some hot chaga tea from chaga mushrooms he had harvested himself. From our first introduction to Sean it was clear that he has a respect and reverence for nature and what it has to offer, and recognizes the importance of using only what is needed. 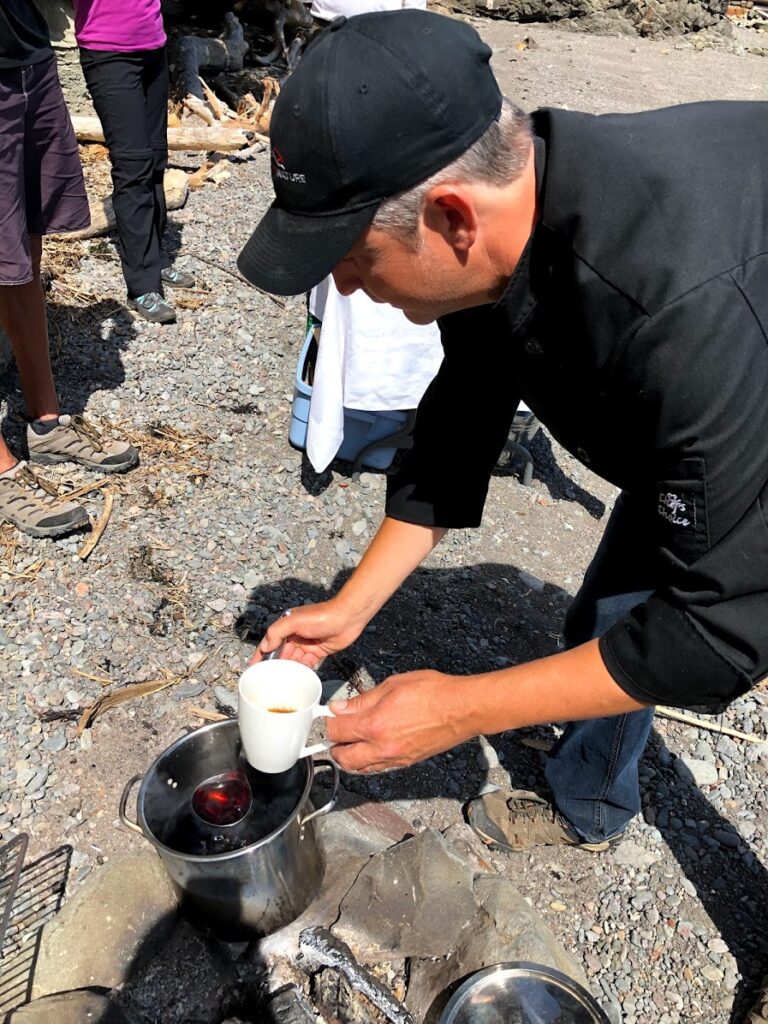 The hot chaga tea was rich, earthy and delicious.

Chaga is a fungus that grows on birch trees throughout the Northern hemisphere. It has been harvested for centuries to be used as traditional medicine. Traditionally chaga was grated and the fine powder brewed to make tea. Chaga has grown in popularity in recent years and can now be found in health food stores in small, dark brown chunks that look like charcoal. You can harvest your own if it grows in your area and you know what to look for. Chaga is typically harvested in late fall. As Chef Sean reminded us on our adventure, chaga is slow growing, so be conscious of not harvesting excessive amounts of chaga at once.

As we all have a unique bio individual chemistry, consuming chaga in large quantities may not be a good choice for everyone. People with autoimmune conditions should limit their consumption of chaga because of its excitatory effect on the immune system. In combination with diabetic medications, it may cause blood sugar levels to drop too low. If you are taking blood thinners, chaga can increase the risk of bleeding.

Sampling new health promoting foods is a great practice, but never overindulge without doing a bit of research if you have any kind of health condition.

We sipped our chaga tea as Sean showed us how to find the periwinkles and whelks under the rockweed, and how to harvest the rockweed so that it continues to grow. We explored the landscape, peeked under long, thick clumps of seaweed, and managed to harvest enough sea snails to sample the harvest. 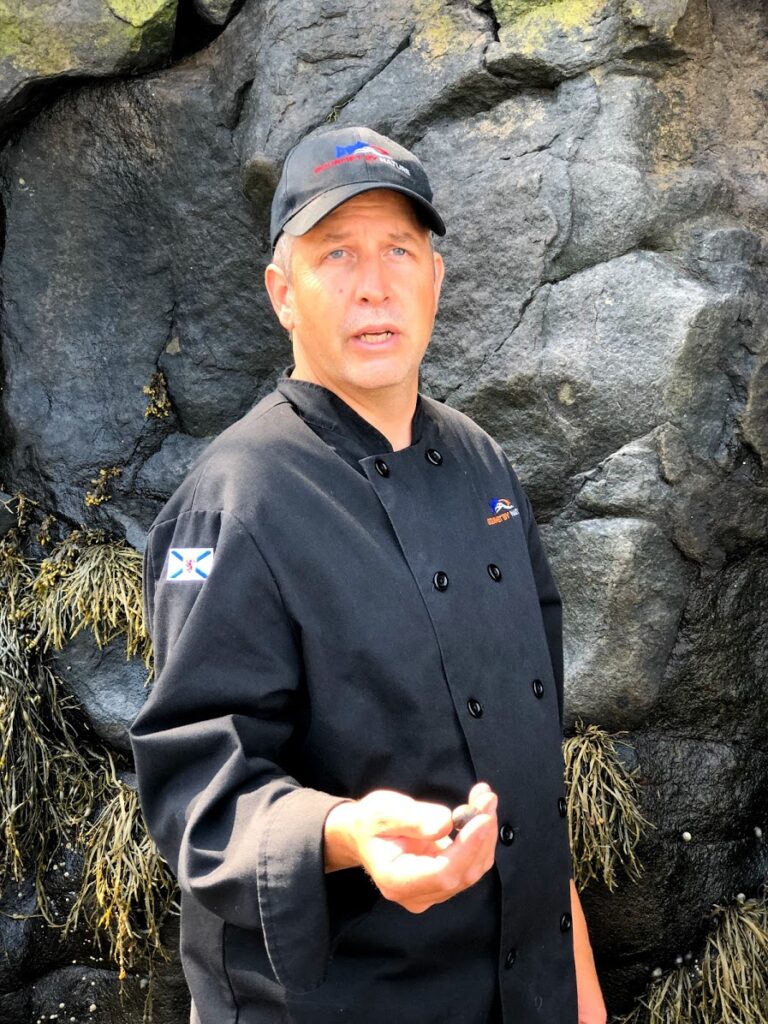 Wild Chef Sean Laceby showing the group a periwinkle harvested from under the rock-filled seaweed. 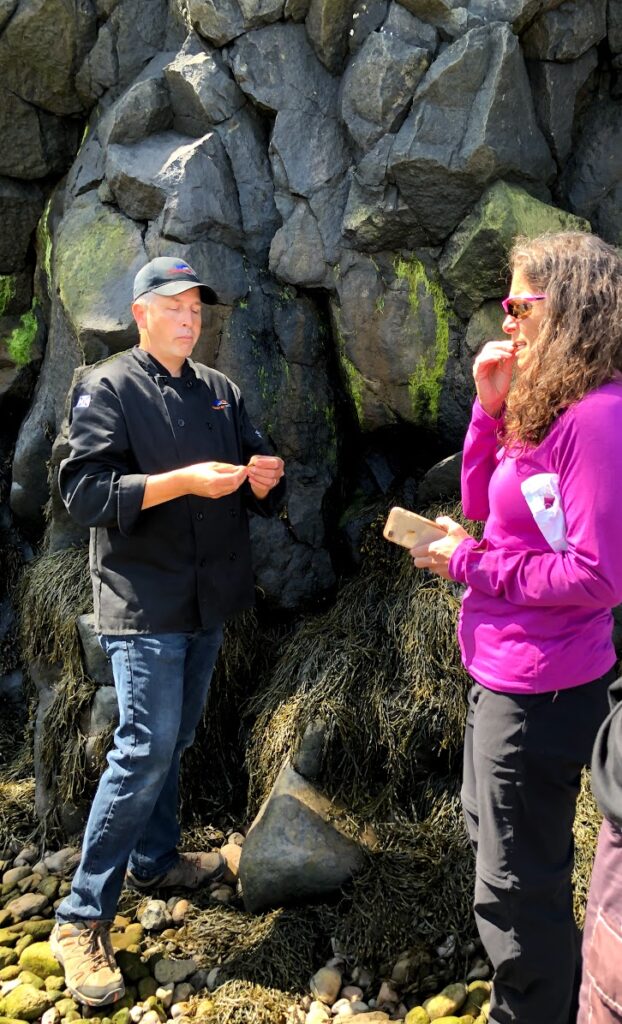 Sampling a piece of seaweed. It was not as salty as I had anticipated. 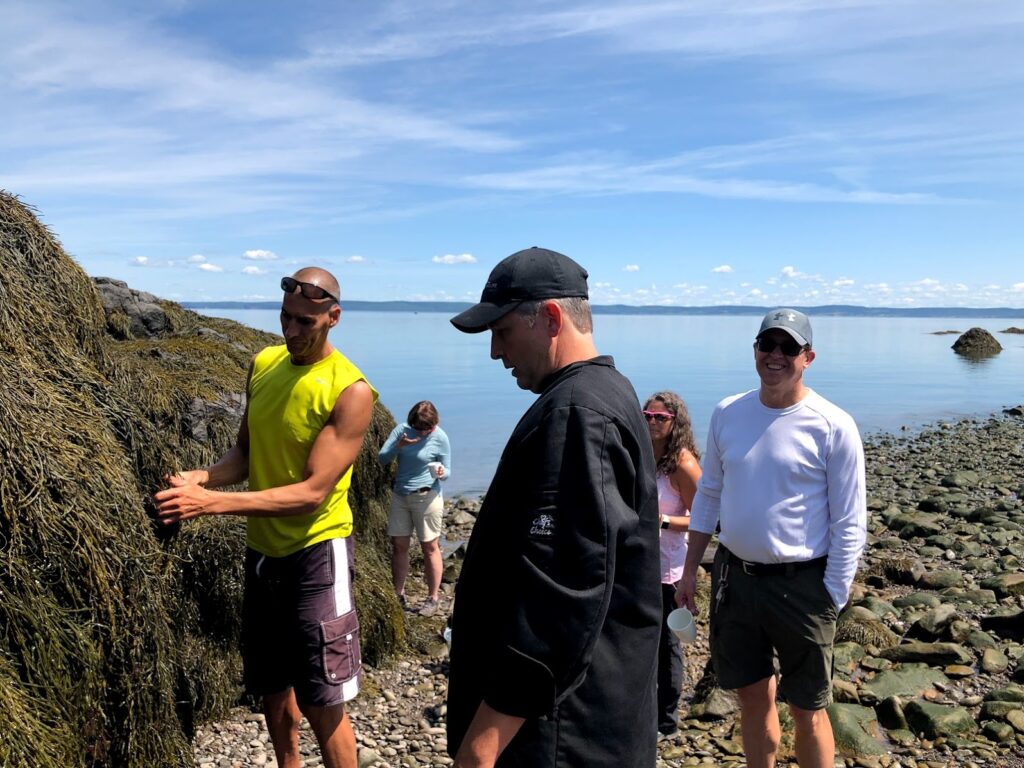 My love seemed to be the most industrious of the group and got right to the task of searching for and harvesting periwinkles. 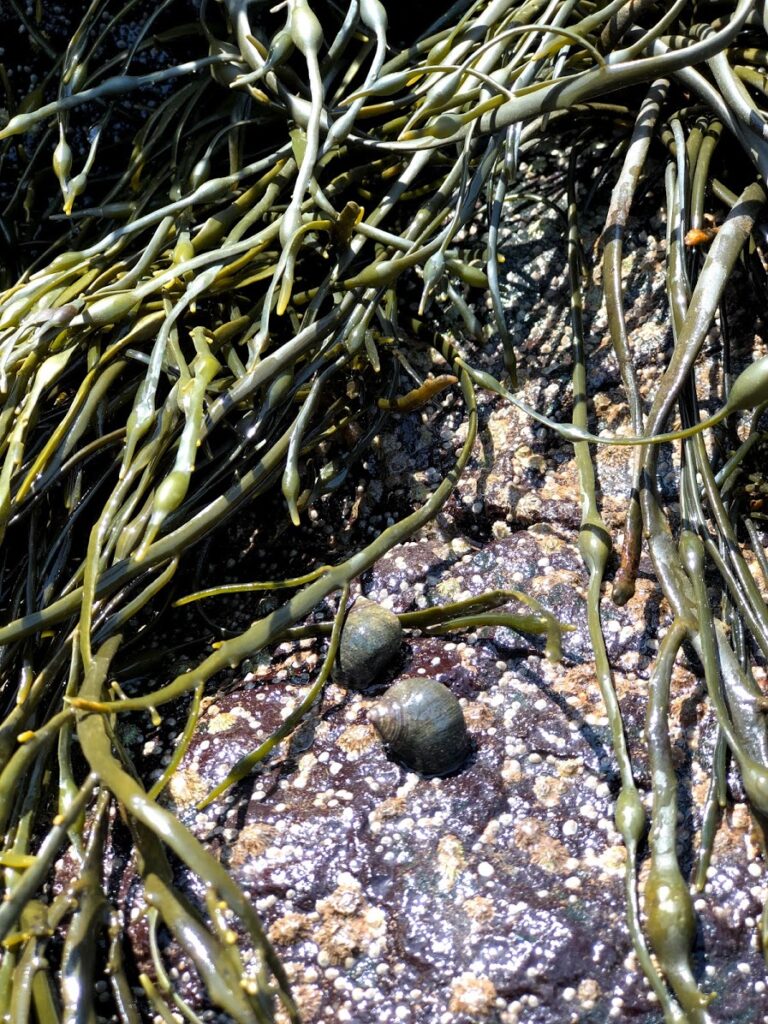 The periwinkles hide on the rocks, under the seaweed.

Chef Sean knew the harvest of sea snails and seaweed was not going to be enough to sustain us all, so he had also prepared freshly made pumpkin pasta as the main course. As we sat round the fire watching Sean effortlessly work his magic, he toasted some of his fresh sourdough bread for us to enjoy with balsamic vinegar and oil. 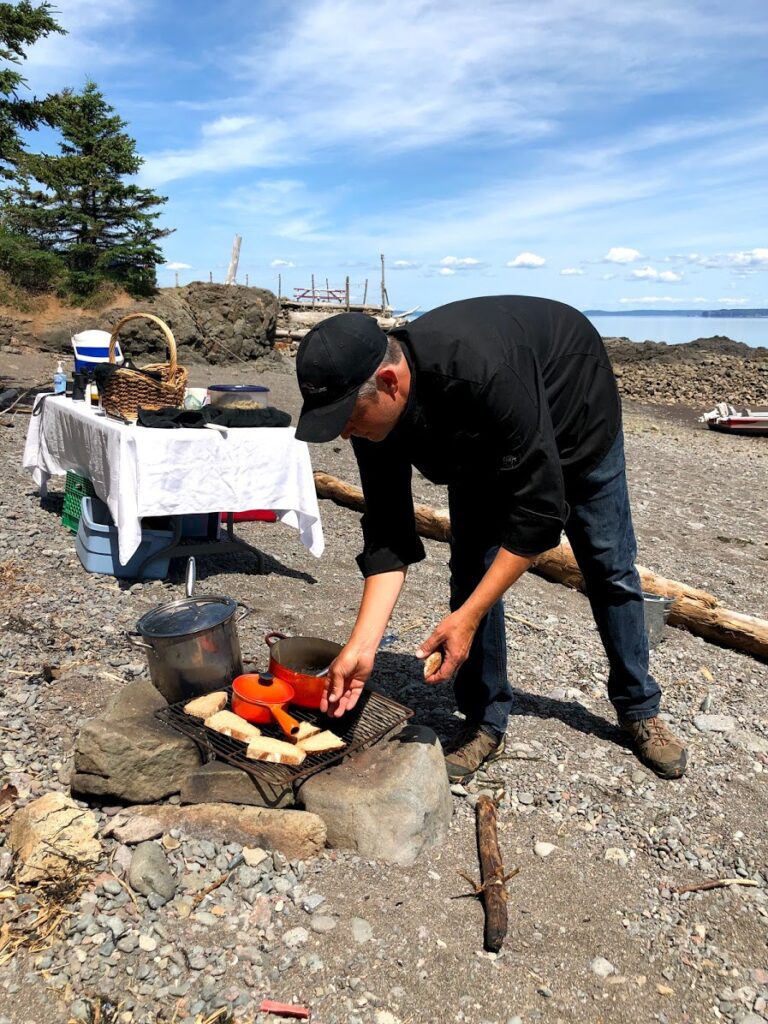 Sean cooked the periwinkles, whelks and seaweed in olive oil, fresh garlic, and some local wine. We watched as the rockweed started to turn a beautiful bright green as it cooked. 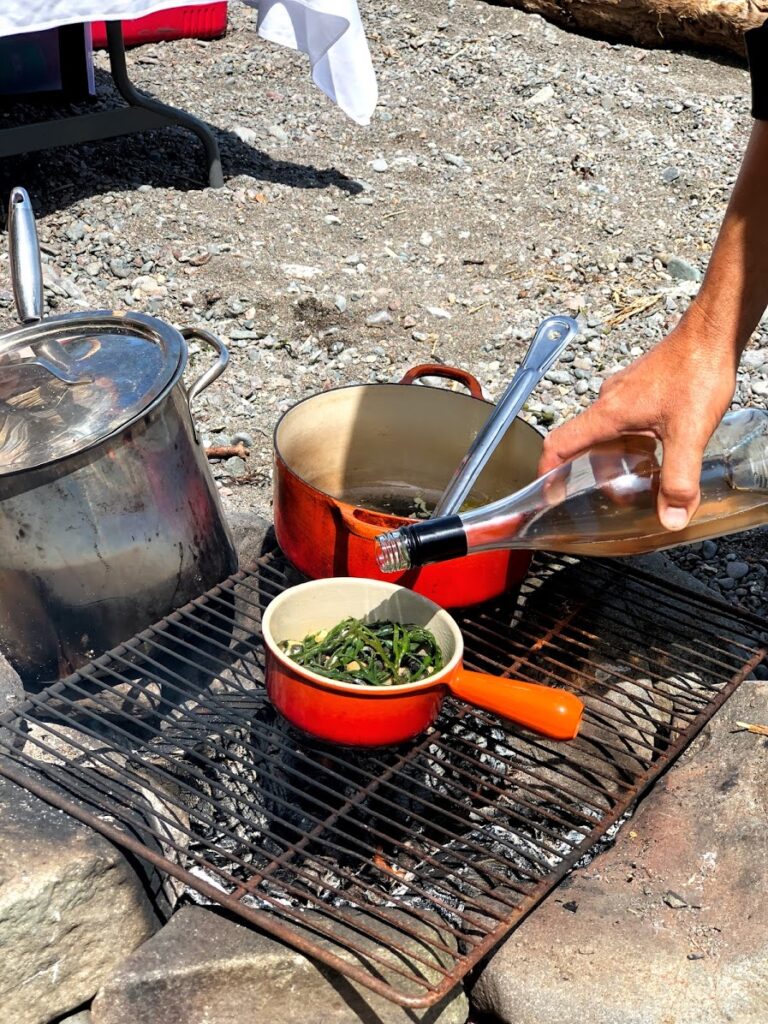 Everything tastes better with a splash of wine. Sean’s commitment to local includes using local wine in his dishes. 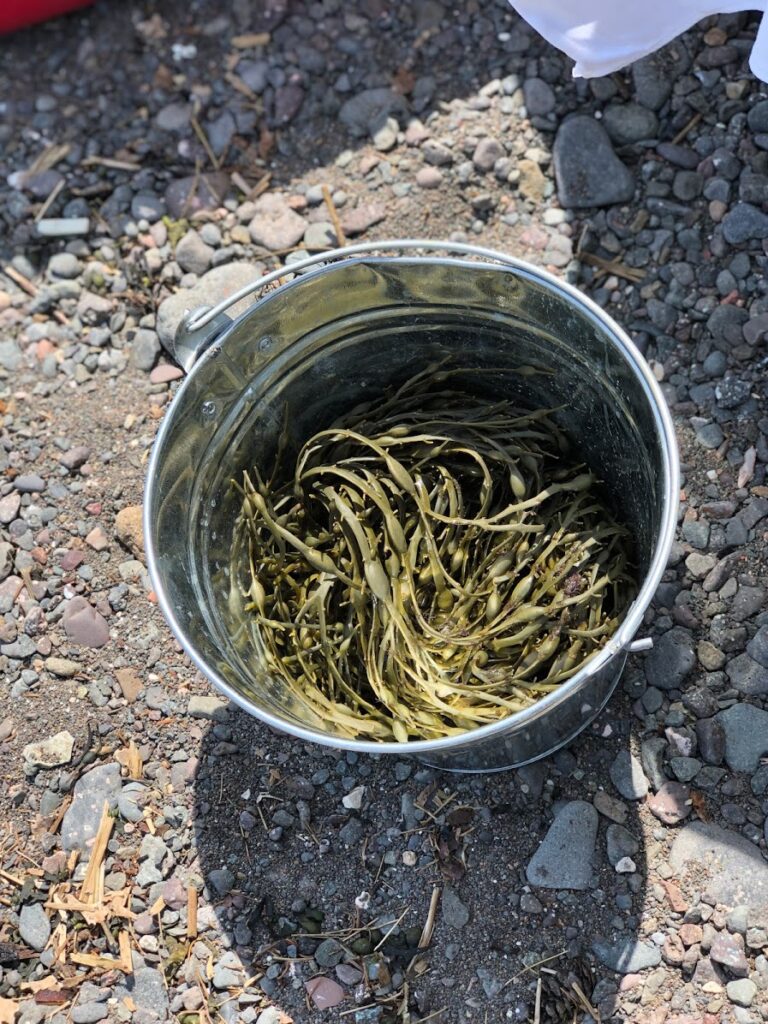 Once the periwinkles were lightly steamed Chef Sean showed everyone how to eat them. 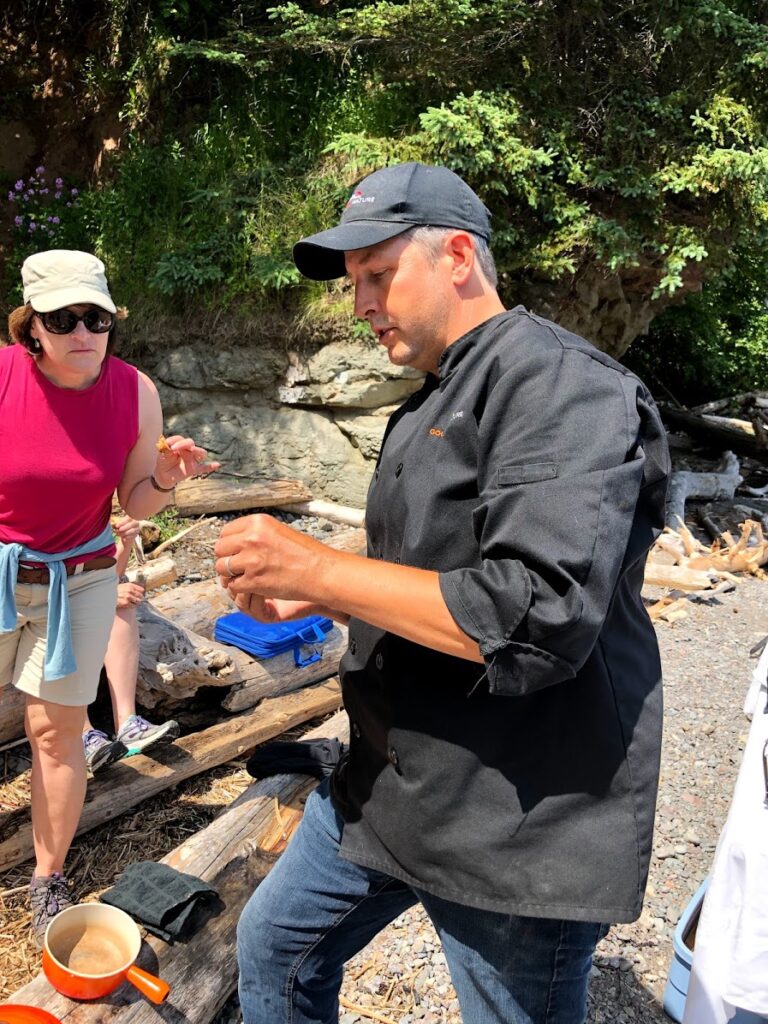 Chef Sean showing how to get the meat from a periwinkle.

He then continued cooking and sharing stories as the appetizers were being enjoyed. 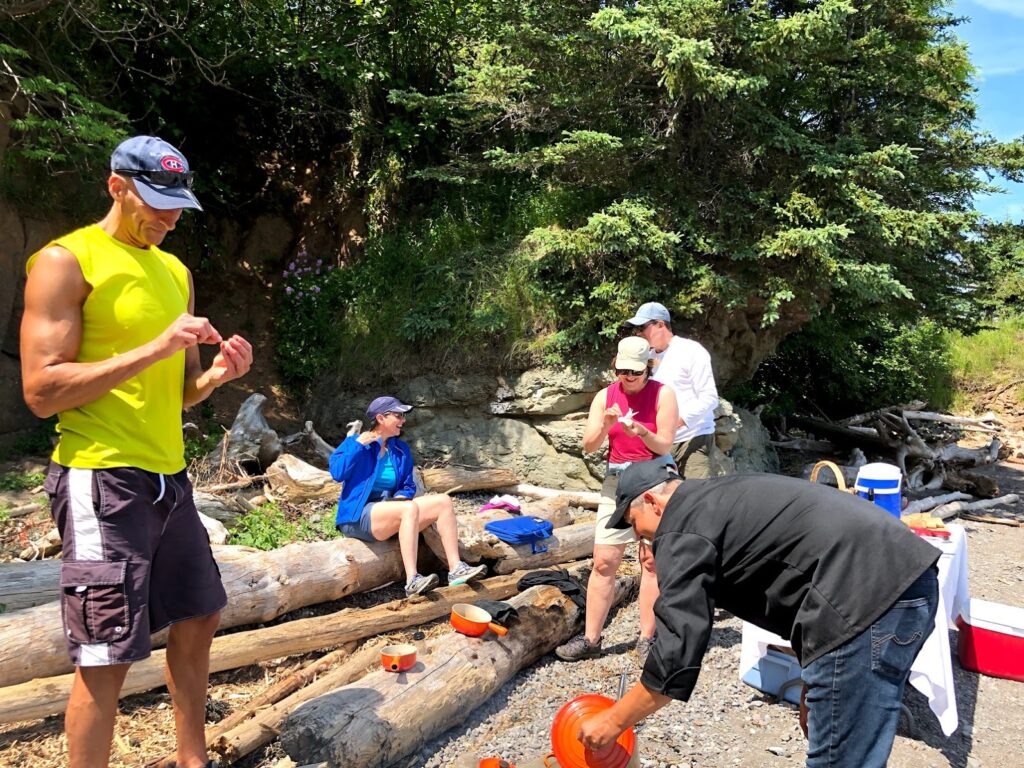 Smiles and laughter are all part of the adventure. 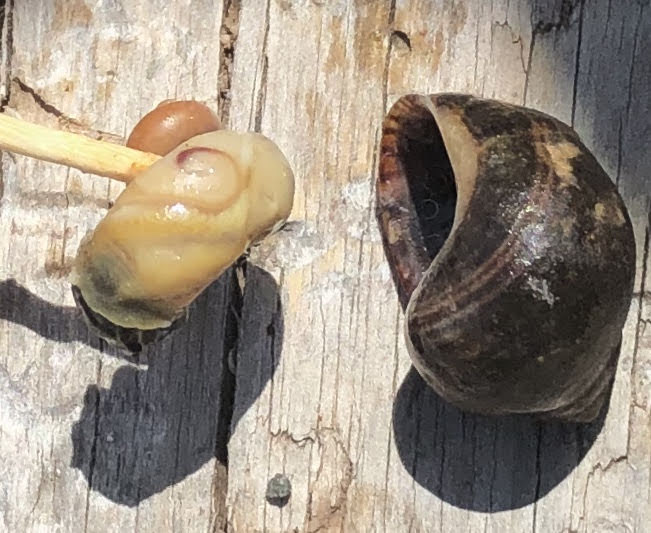 The gourmet main course started with olive oil, garlic and red onions. Then Sean added finely sliced and chopped parsnips that had overwintered in his garden, wild mushrooms that he and his young son had harvested and frozen last fall, and his own fresh oregano. 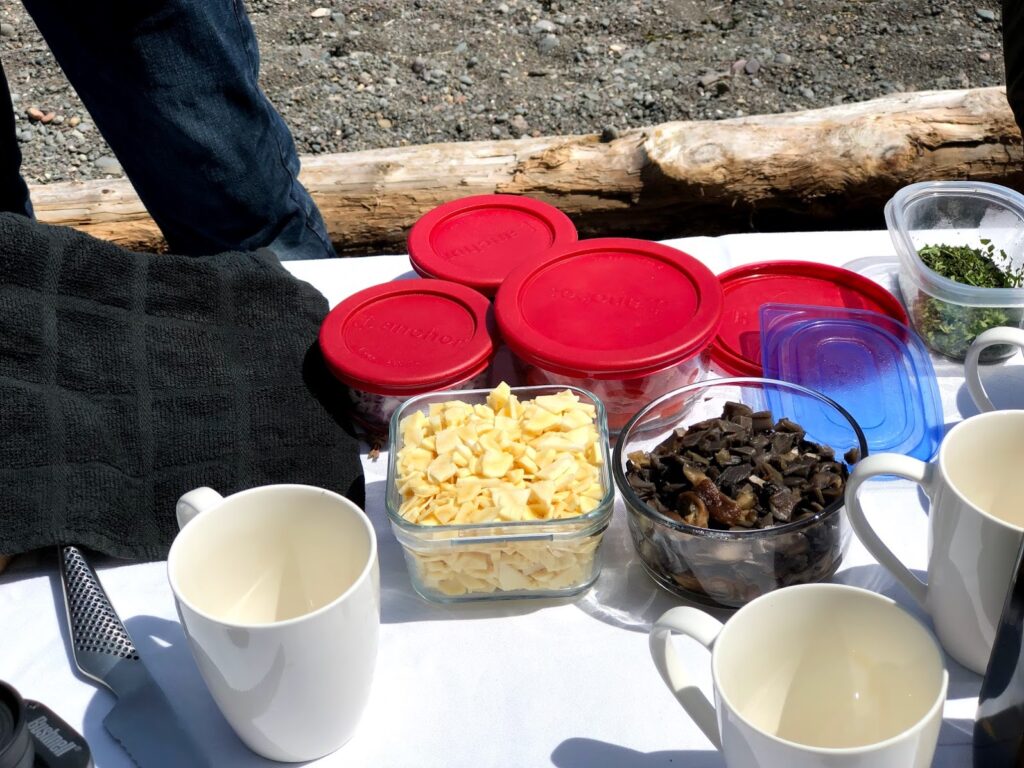 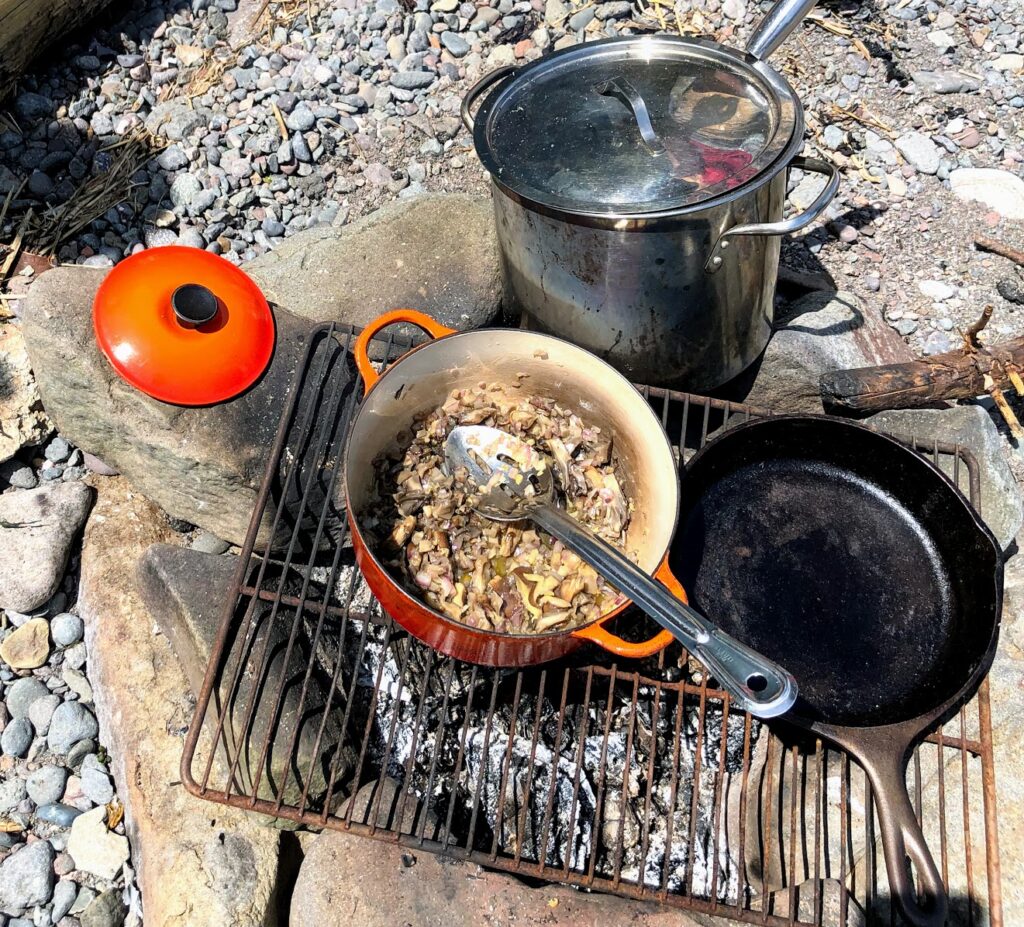 Chopped parsnips and wild mushrooms were added to the olive oil, garlic and onions while the skillet heats up for the fresh pumpkin pasta.

Then tomatoes, oregano that Sean had grown and dried himself, and our harvested rockweed were added to the pot. 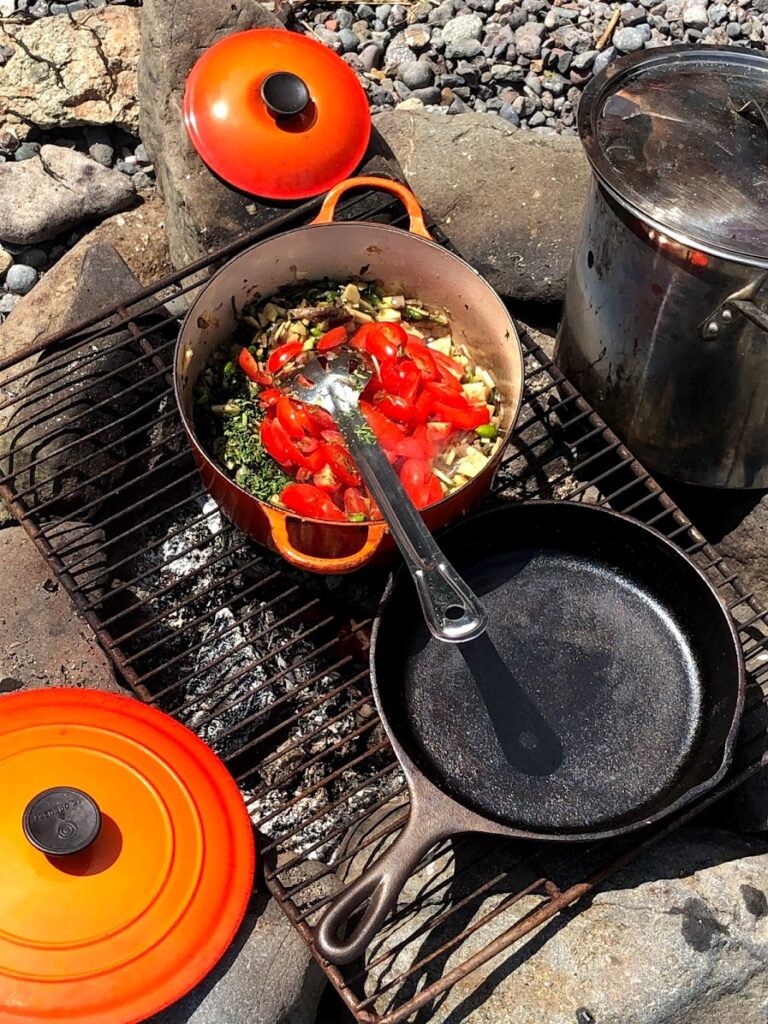 Look at how beautiful the vegetables are in that pot!

Time to heat up the fresh pumpkin pasta to combine with the beautiful vegetable combination. 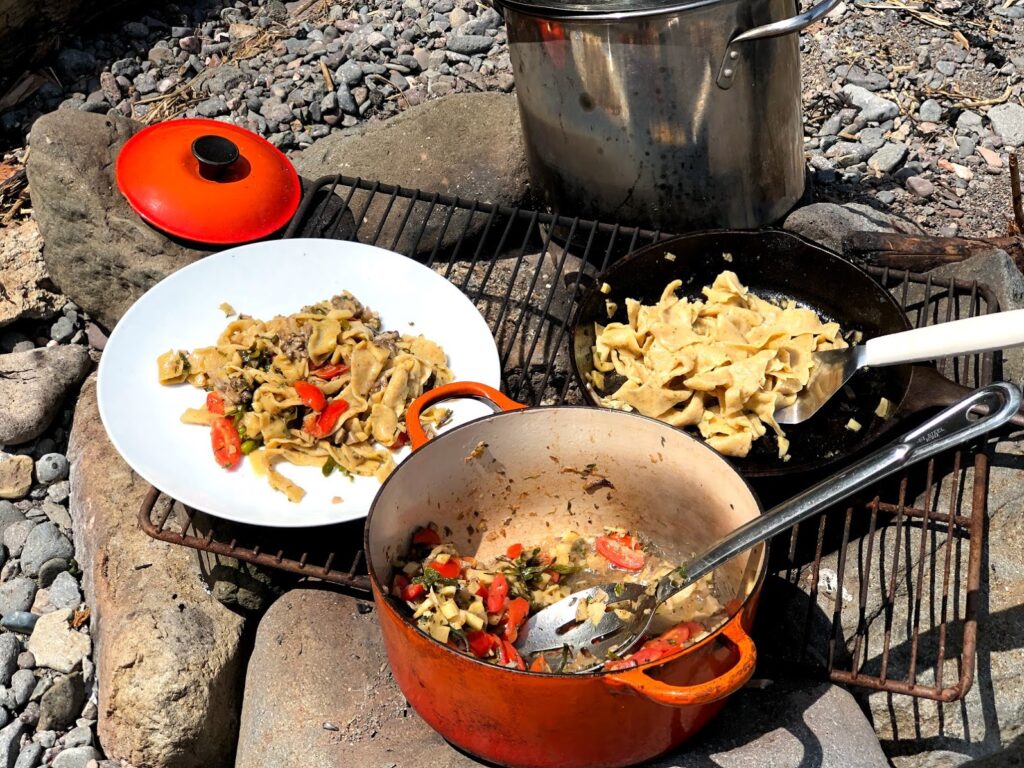 The first plate is almost ready.

Chef Sean brought fried parsnip ribbons and rockweed he had harvested while he scouted our location to garnish the dishes. Everyone sampled them when we first arrived and all agreed that in addition to being garnishes, they would be delicious snacks on their own as well. 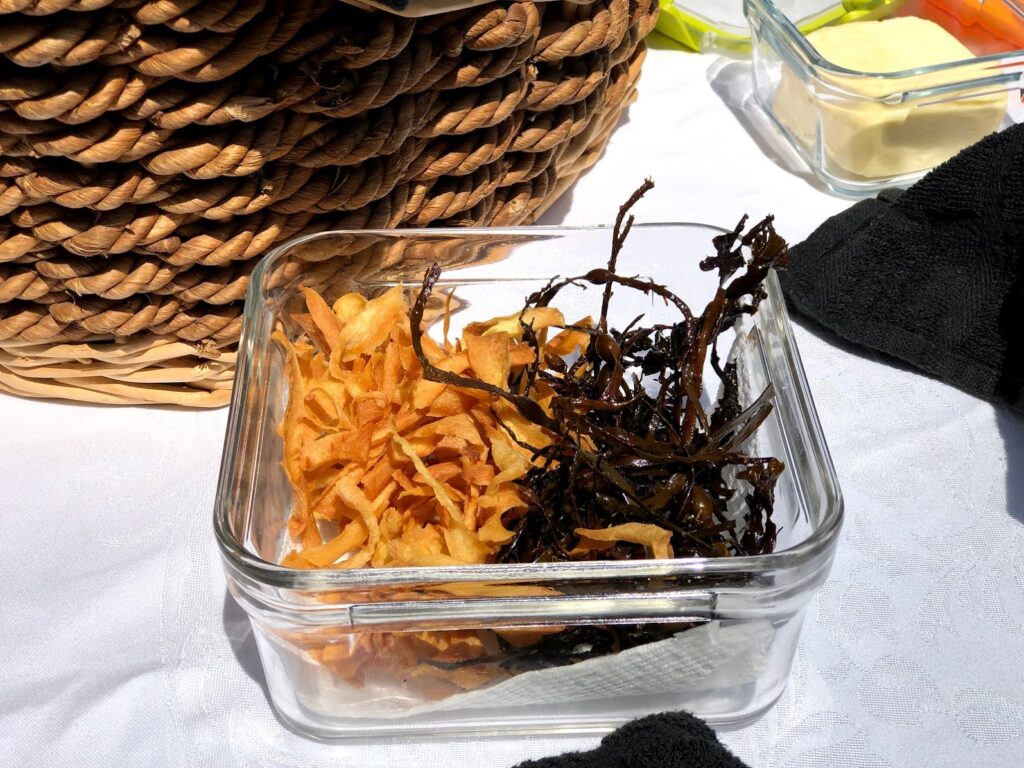 Fried parsnips strips and seaweed will be crispy garnishes for our pasta lunch.

The final topping for the dish was fresh coriander from Sean’s garden. If there was only such thing as taste-o-vision so you could know how fabulous this pasta dish tasted. 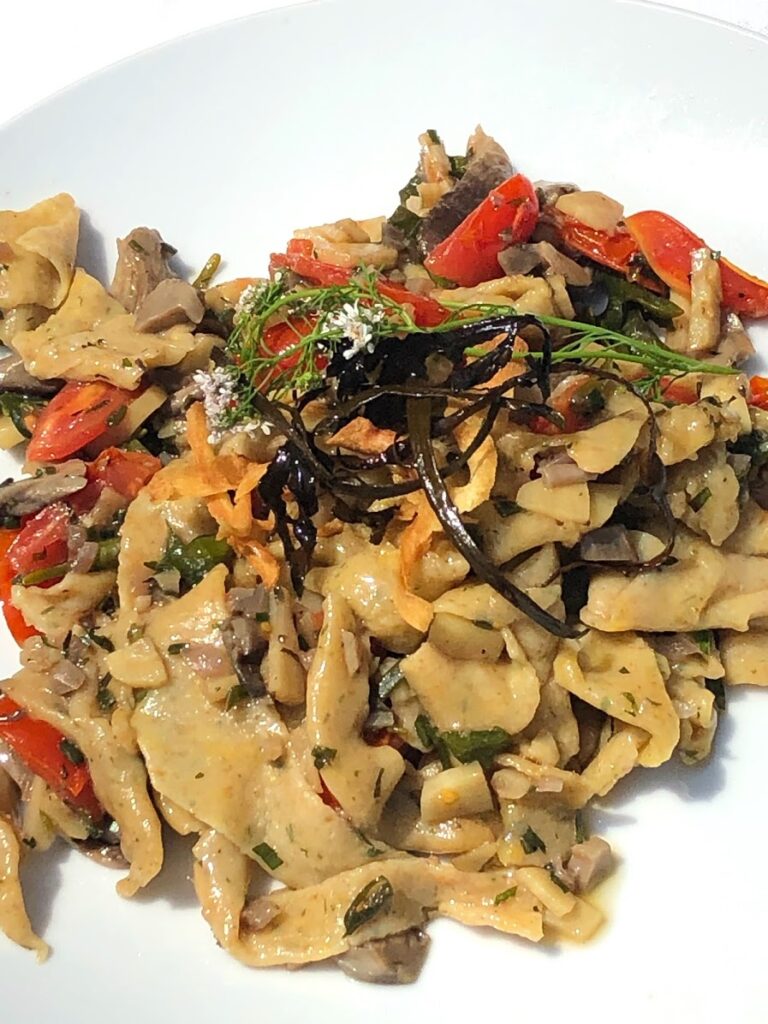 What a spectacularly nourishing day of social connections with people I care about, enjoying the beauty and the bounty of nature and whole foods.

Wild Chef Sean Laceby provided us with a Gourmet by Nature experience like no other. Our adventure was primarily plant based, by request, but Sean is also a licensed hunting and fishing guide, so just imagine what you’d experience if your adventure started with hunting or fishing for your food! Sean also goes to private homes to prepare wild food dinner parties. Delicious local whole foods enjoyed on the ocean floor, the epitome of friluftsliv.

This website uses cookies to improve your experience while you navigate through the website. Out of these, the cookies that are categorized as necessary are stored on your browser as they are essential for the working of basic functionalities of the website. We also use third-party cookies that help us analyze and understand how you use this website. These cookies will be stored in your browser only with your consent. You also have the option to opt-out of these cookies. But opting out of some of these cookies may affect your browsing experience.
Necessary Always Enabled

Any cookies that may not be particularly necessary for the website to function and is used specifically to collect user personal data via analytics, ads, other embedded contents are termed as non-necessary cookies. It is mandatory to procure user consent prior to running these cookies on your website.